The Flight of the Creative Class

The 2006 follow-up to The Rise of the Creative Class takes the argument to the next level. Arguing that this global competition for creative talent will be the defining economic issue of the 21st century. On this front, the United States may already be losing its traditional lead. What made the U.S. an economic superpower, Florida argues, was not its factories or raw materials or even military might alone – but the people it attracted to its shores from around the world. Now, in the wake of 9/11, there are ominous signs indicating that attractiveness may be waning.

Beyond just the United States, Florida’s sweeping look at how regions and nations around the world are adapting to the global creative economy holds valuable lessons for anyone interested in the future of economic growth and prosperity. A wake-up call to business, political, and cultural leaders alike, Flight weaves these issues together in the sort of macro-level analysis that will truly affect the way Florida’s audiences view the world around them.

As always, Florida’s forecast is not all doom and gloom, but offers strategies for the U.S. to regain its creative lead in the world economy. Finding ways to mitigate gross inequality, harness the creativity of all human beings, take on political polarization, and retain the traditional openness of American society to international influence will all be crucial to the success – or failure – of the United States.

“We all worry about the deficit, the competitive challenge of China and trillions of dollars in unfunded Social Security obligations. But Richard Florida’s book points to a far greater threat that policy makers and professionals need to quickly understand and–just as quickly–act upon. ‘If you read one non-fiction book this year’ is as hackneyed as it comes–but in this instance fully merited”.
— Tom Peters
“Creativity has become the global gold standard for economic growth, and yet the United States seems intent on shooting itself not just in the foot, but in the brain. Richard Florida’s new book should be required reading for elected officials, policy makers, educators, business leaders—and every citizen who’s concerned about the future of this country”.
— Alan M. Webber, Founding Editor, Fast Company Magazine
“Richard Florida sounds a wake-up call for companies that thrive on the creativity of their employees, customers, and communities. ‘The Flight of the Creative Class’ challenges everyone – business, community, and political leaders alike – to engage and support education, technology, R&D, and community building in an effort to create a better future”.
— Jim Goodnight, founder and CEO, SAS, a leading business intelligence software company that is consistently ranked among America’s best places to work
“Richard Florida has provided extraordinary insight into one of the most poorly understood problems facing the international community today. The movement of human capital, particularly the most creative and talented, from nation to nation is critically important to understanding why the future of some countries is assured and that of others doomed. A first-rate piece of work”.
— Carl Schramm, President and CEO, The Ewing Marion Kauffman Foundation
Flight Articles

Governor Chafee is drawing attention to “The Flight of the Creative Class,” a 2007 book by Richard Florida, a best-selling author and University of Toronto professor who emphasizes the “3 Ts of economic growth: Technology, Talent and Tolerance.”

Publisher’s Weekly : The Flight of the Creative Class: The New Global Competition for Talent: Richard Florida

Following up on The Rise of the Creative Class (2002), Florida argues that if America continues to make it harder for some of the world’s most talented students and workers to come here, they’ll go to other countries eager to tap into their creative capabilities—as will American citizens fed up with what they view as an increasingly repressive environment.

In recent years, Florida has carved a niche for himself raising the class consciousness of graphic designers, software engineers, research scientists, business entrepreneurs, writers and academics and assorted other people involved in intellectual forms of work.

Richard Florida urges the US to prepare its children with a comprehensive education translating into jobs not only in computer science and software programming but also in market research and the development of new financial instruments.

By Richard Florida, Across the Board: the Conference Board Magazine – Sept 1994

Where the Creative Class Comes From, and Flies? (In Japanese)

By Danielle Teutsch, The Sydney Sun-Herald – May 2005

Why Conservatives Must Win the ‘Creative Class’ (not available online)

A Search for Jobs in Some of the Wrong Places

Today’s Zaman : ‘The Flight of the Creative Class’

Richard Florida’s “The Flight of the Creative Class: The New Global Competition for Talent” is a thought-provoking book says Melih Arat.
Florida discusses global competition, which was once a contest between countries, and now belongs to cities. In today’s world cities are in competition in terms innovation and creativity.

Amazon Booklist : The Flight of the Creative Class: The New Global Competition for Talent: Richard Florida

Professor Florida makes an impassioned plea, using his first book, The Rise of the Creative Class (2002), as a jump start, for the U.S. to retain its stature as an open and welcoming home for talent.

Losing Our Edge (not available online)

By Cecil Johnson, Special to the Star-Telegram – April 2005

By Cecil Johnson, Special to the Star-Telegram – April 2005

Talent: Will America Lose Out?

Hitch Your Wagon to Estonia

By Clayton Collins, The Christian Science Monitor – May 2005 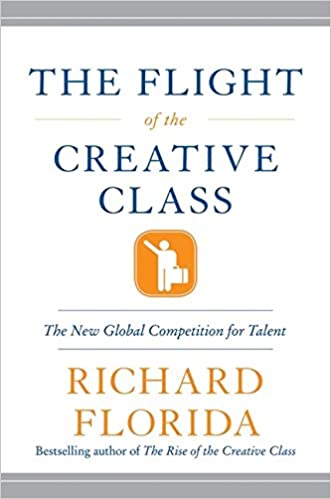