How the Creative Economy is Making the Place Where You Live the Most Important Decision of Your Life.

It’s a mantra of the age of globalization that where you live doesn’t matter: you can telecommute to your high-tech Silicon Valley job, a ski-slope in Idaho, a beach in Hawaii or a loft in Chicago; you can innovate from Shanghai or Bangalore.

According to Richard Florida, this is wrong. Place is not only important, it’s more important than ever.

Globalization is not flattening the world; on the contrary, the world is spiky. Place is becoming more relevant to the global economy and our individual lives. The choice of where to live, therefore, is not an arbitrary one. It is arguably the most important decision we make, as important as choosing a spouse or a career. In fact, place exerts powerful influence over the jobs and careers we have access to, the people we meet and our “mating markets” and our ability to lead happy and fulfilled lives.

Who’s Your City provides the first ever-rankings of cities by life-stage, rating the best places for singles, young families and empty-nesters. And it grounds its new ideas and data to provide an essential guide for the more than 40 million Americans of who move each year on how to choose where to live, and what those choices mean for their lives, happiness and communities.

adminAugust 13, 2009
Who's Your City Features and Reviews

The Oxford American : Featured Writer of the Month Interview with: Richard Florida

Now that Florida has stimulated further debate about the correlation between location and happiness, OA publisher Warwick Sabin asked him to apply his theories to the American South, where a sense of place has always mattered most.

adminAugust 9, 2009
Who's Your City Features and Reviews

The Urban Loft : Who’s Your City? (and the Impact on Church Planting)

Whether you’re a city lover, have a keen interest in our economy, or an arm-chair social scientist seeking to understand global trends then this book will give you much to ponder.

adminJune 29, 2009
Who's Your City Features and Reviews

SF Women’s Health Examiner : The geographic cure: A pesonal perspective on how your city of residence brings joy or sorrow

Columnist Rheba Estante’s personal perspective on how your city of residence brings joy or sorrow.

adminJune 15, 2009
Who's Your City Features and Reviews

adminMay 26, 2009
Who's Your City Features and Reviews

Tim Harford finds out why deciding where you live could be the most important decision of your life.

adminApril 17, 2009
Who's Your City Features and Reviews

PLACE matters. It affects your career chances, your choice of life partner, and, according to transplanted American economist Richard Florida, your chances for personal happiness and fulfillment.

Spectrum investigates Ireland’s response to its changing ethnic and cultural makeup. Through debate, comment and analysis of the international context, Spectrum explores how Ireland is coping with its new multiculturalism. The programme is presented by Zbyszek Zalinski.

adminFebruary 16, 2009
Who's Your City Features and Reviews

Richard Florida presents a potent argument for why a few cities are emerging as extremely successful economic powerhouses, while most are in decline. Florida argues that we are now able to choose a place to live from cities around the country and all one needs to do is match a city’s personality and social possibilities with our individual needs and preferences also arguing that these needs can change with
different stages — early career, raising a family and retirement — of life.

In Who’s Your City, I make an argument about the importance of “place” in the global economy and how it is creating a spiky world…

Business Insider : These Are The Top-Ranked US Cities For Starting A Business

Richard Florida’s “Who’s Your City?” is a cool book that takes a look at the impact of where you live on your professional and social opportunities. Florida conducted research to understand what places attract entrepreneurial minds, how they do it, and its affect on the regions these places inhabit. He also takes a look at what cities represent the best opportunities to find a mate, start a family, be an empty nester, and retire.

WSJ asks Richard Florida and five other experts which 10 cities will emerge as the hottest, hippest destinations for highly mobile, educated workers in their 20s when the U.S. economy gets moving again.

Richard Florida speaks at the University of Texas at Arlington sharing insights that the Dallas-Forth Worth area is doing okay but has room for improvement.

adminSeptember 28, 2009
Who's Your City News Articles

In his latest book, “Who’s Your City?.” Florida expands on the work that he’s done in previous books to speak to two audiences. First, the book gives cities a sense of what they need to do to attract and keep the best and the brightest. Second, the book gives guidance to individuals trying to make the very important choice of where they want to live. How does Jackson rank?

adminSeptember 16, 2009
Who's Your City News Articles

Examiner : Where the girls are… in the West

The Sacramento Bee catches the numbers mapped out by University of Toronto professor Richard Florida in his book “Who’s Your City?”, comparing the ratio of single men to women ages 20 to 64 in urban areas across the United States.

adminSeptember 8, 2009
Who's Your City News Articles

Richard Florida argues rather forcefully that “personality plays a significant role in understanding cities, regions … and economic growth.”All this begs the question that Florida asks, “Who’s your city?” What is the “personality” of our city? Or, what is the “Spirit” of Toledo?

adminAugust 28, 2009
Who's Your City News Articles

Brisbane Times : Technology is no substitute for the messiness of humanity.

Richard Florida tackles the enduring appeal of the city in his book Who’s Your City? and despite our ability to live remotely, we still crave the buzz of cities.

adminAugust 23, 2009
Who's Your City News Articles

The flattening of the world increasingly makes it possible for anyone to do business from anywhere, as author Thomas Friedman has pointed out. However, that doesn’t mean place is irrelevant to business. In fact, it matters more than ever, according to author Richard Florida. At the intersection of Opportunity and Culture, the concepts of Friedman and Florida collide.

Progress Media : You Are Here

Want to be more successful and happy? Richard Florida says take a hard look at where you live , and if it’s not the right fit, move to a place that is.

The proposed ‘new media’ Ignition Festival being planned for Noosa early next year, could spawn the first creative company to come out of the Noosa Creative Alliance project being mentored by well-known international academic Richard Florida.

A Sustainable Streets program will be launched in Peregian June 28 with the Green Sunshine project rallying participants for the Living Smart Homes Program.

Noosa News : Plans are under way for festival

“We are the creative hub of Tallahassee where visual artists, performance artists, small businesses and entrepreneurs can find a place to showcase their work in an 18-hour downtown environment,” Costigan said of Gaines Street.

The Creative Region Initiative was launched with the help of Richard Florida who urges communities to develop a creative class of artists and engineers, musicians and high-tech workers — people who think and create for a living — in order to thrive economically.

A Youth festival, green sunshine projects, increased success for young businesses, a more vibrant artistic community and communication channels to promote each of them will be put into place in Noosa over the course of the next year.

Sunshinte Coast Daily : Outcomes from the “other” ideas summit

Stage III of Noosa’s Creative Communities project was held at Noosaville, with 30 of the region’s best and brightest taking part in a two-day Creative Communities Leadership Program workshop designed to identify some key initiatives to generate greater economic prosperity.

If Dayton wanted to impress somebody, it could do worse than Richard Florida.

Recently, he gave an interview in which he said:
“I was just in Cincinnati and in Dayton, another city I love. They’re historical centers of innovation … from steel innovation to aluminum innovation, to electronics, to the Wright brothers, to the car. This is one of the greatest innovative and entrepreneurial centers in the world.

“They have probably one of the greatest clusters of universities in the history of the planet. They’re producing phenomenal talent, but, unfortunately, that talent leaves. …

Memphis, TN had a new kind of blues. Despite its rich history and amenities, and strong economic engines such as the FedEx headquarters, the city was losing annual job earnings, mainly because it could not hold on to young, bright talent. The 2000 census showed that Memphis’ population grew by 6,000 since 1995, but its net income had dropped by $90 million.

Richard Florida believes creative people come in all colours and that they are the key to the new economy. If he didn’t already have a catchy name, Richard Florida could easily be dubbed Mr. T. His celebrated theory of economic prosperity is based on Four T’s. And it was his T for Tolerance that landed the personable American professor in Capital T Trouble when he flew into Noosa last November and media coverage played the gay card. 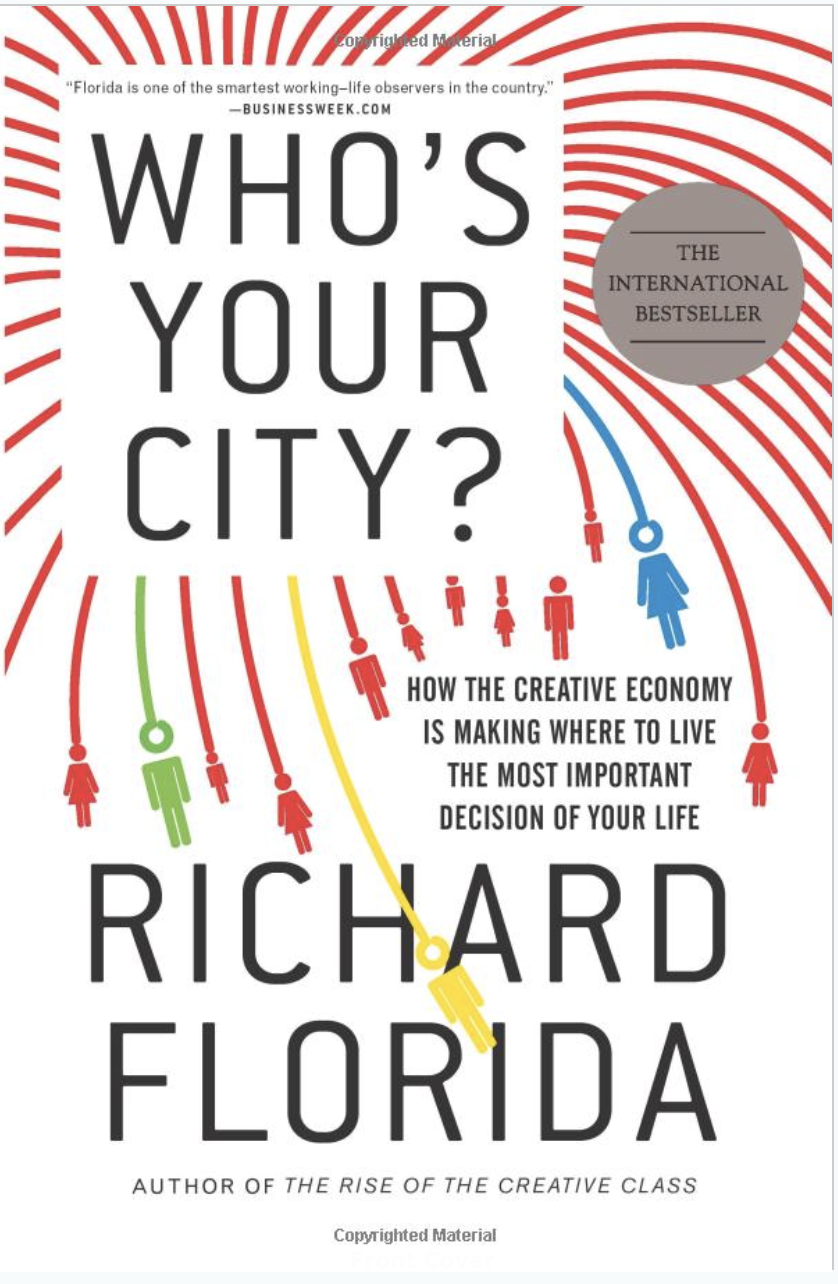 Your favorite bookstore or online retailer

Your favorite bookstore or online retailer